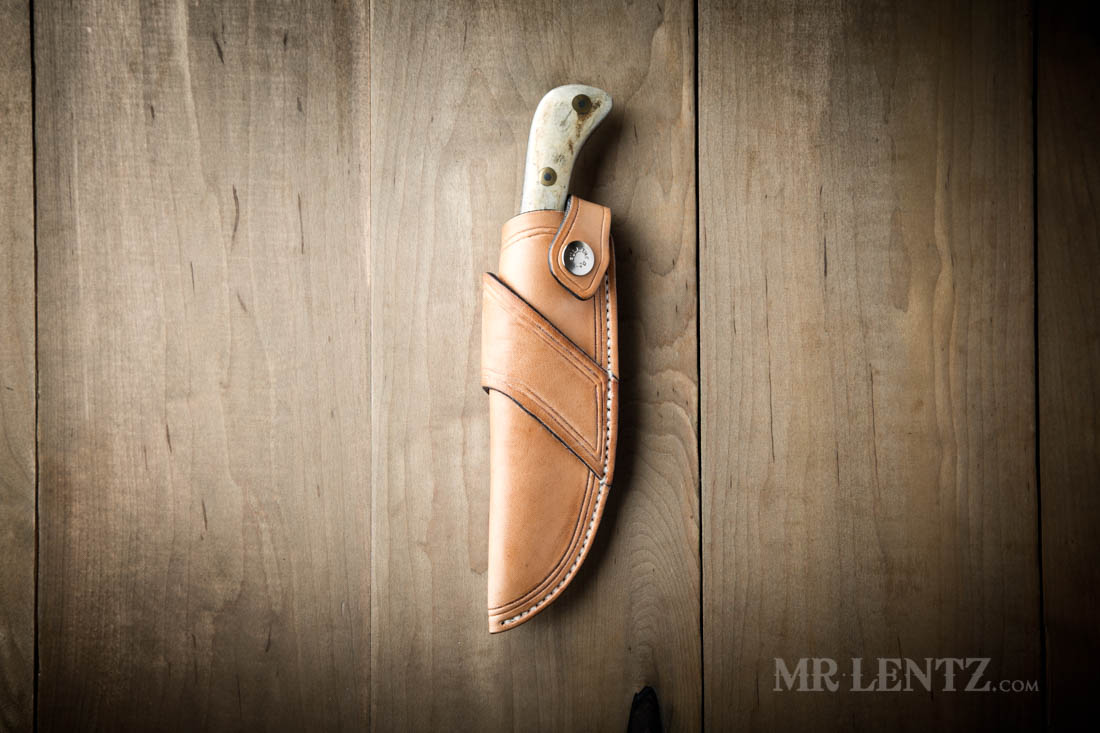 This past weekend found me in my leather workshop building this crossdraw knife sheath. It’s a design I customized a bit from my previous crossdraw sheath to ride a bit more at a 45 degree angle on the belt. It will sit near the small of the back and is completely out of the way when walking around. The only downside (which seems to be shared by most any knife sheath) it can be uncomfortable to wear if you are driving around. I’d recommend removing it for car rides out to the wilderness. That thought just gave me a new idea to try out – similar build but a belt loop that snaps on for easy removal. Maybe I’ll give that a shot in the next post.

Side note: you can find a detailed tutorial on how to make a leather knife sheath here. 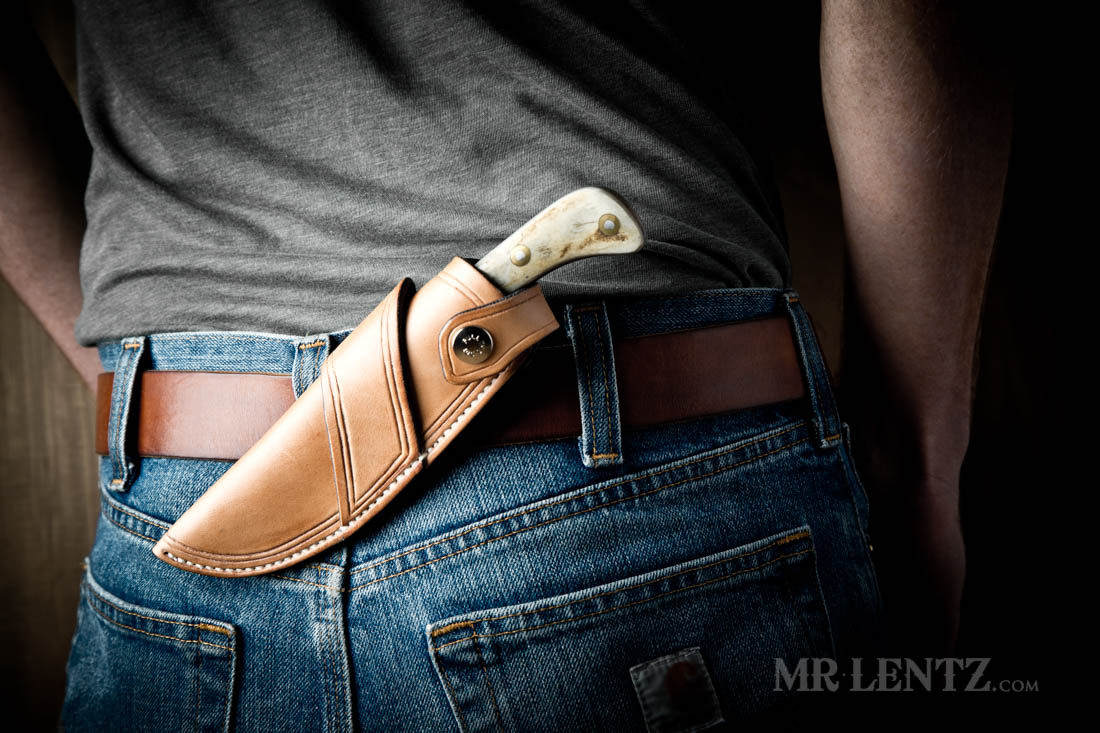 Above is how it rides on the belt. The crossdraw sheath is out of the way of swinging hands. The angle makes it easy to remove the knife and for added security a retention strap holds it all in place. 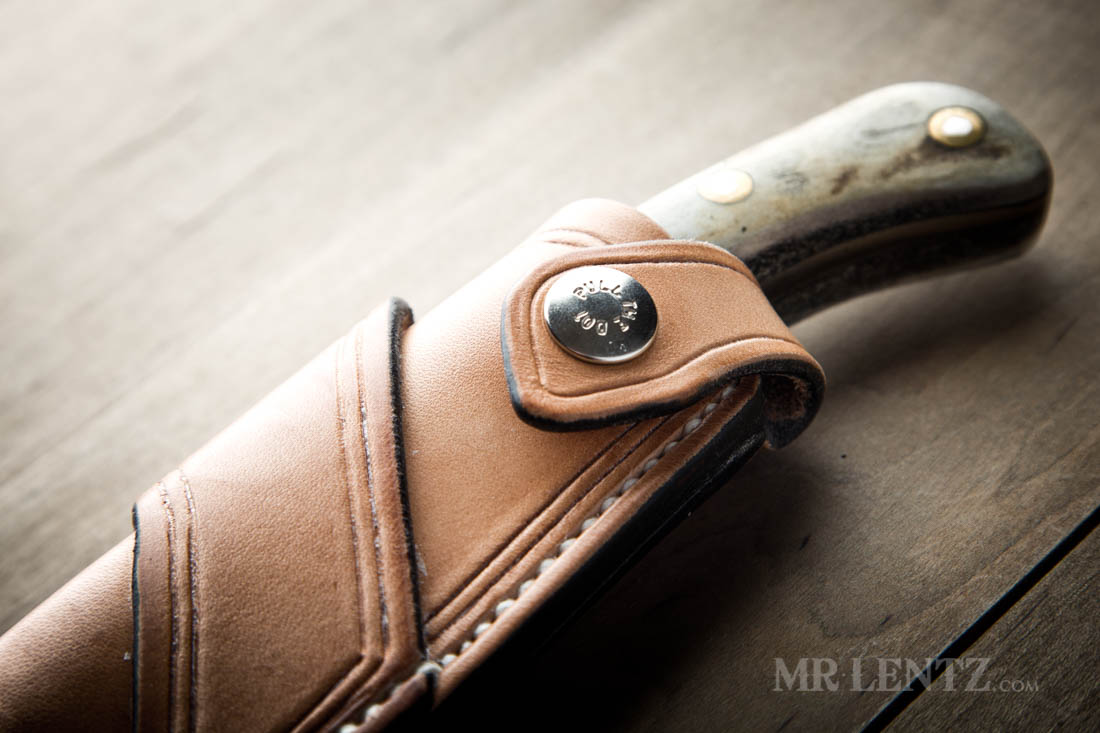 I used a Pull the Dot style snap on the retention strap so that it can only be released from one direction. This protects the strap from opening if it brushes against tables or chairs. I decided to have the open side just below the ‘D’ in Dot in the image. 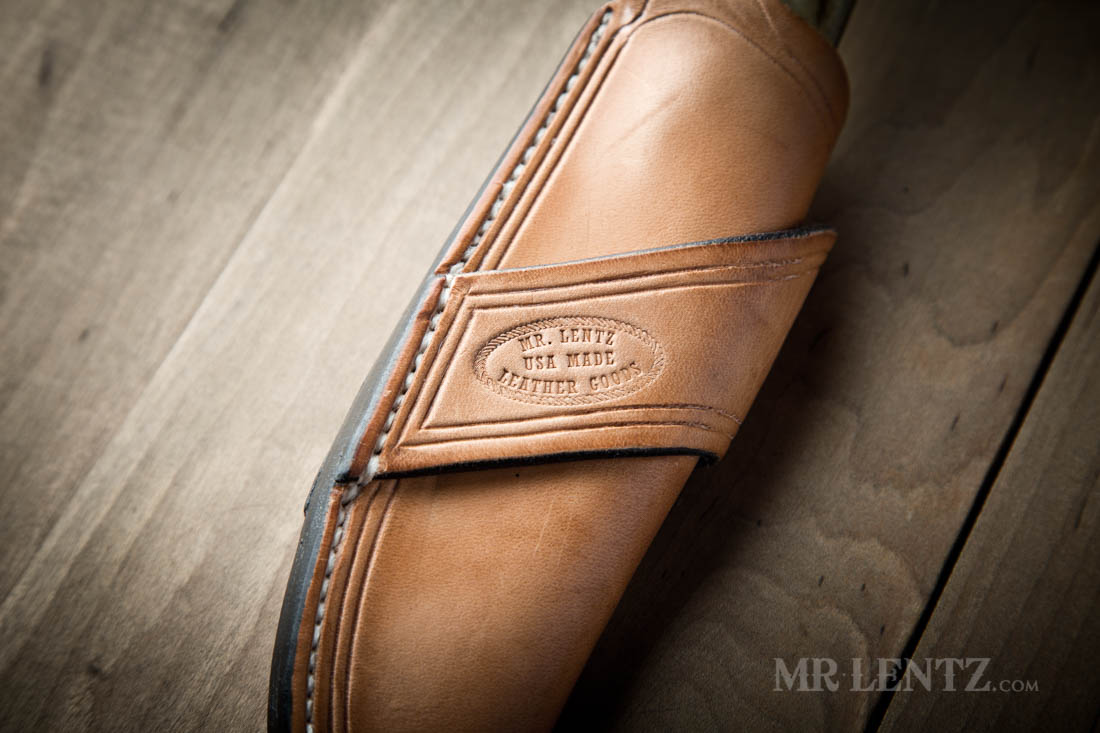 The backside of the stitching really nailed the pre-cut groove I made in the sheath. This groove sinks the stitching in below the surface to protect the thread and allow the sheath to live on for many many many years. 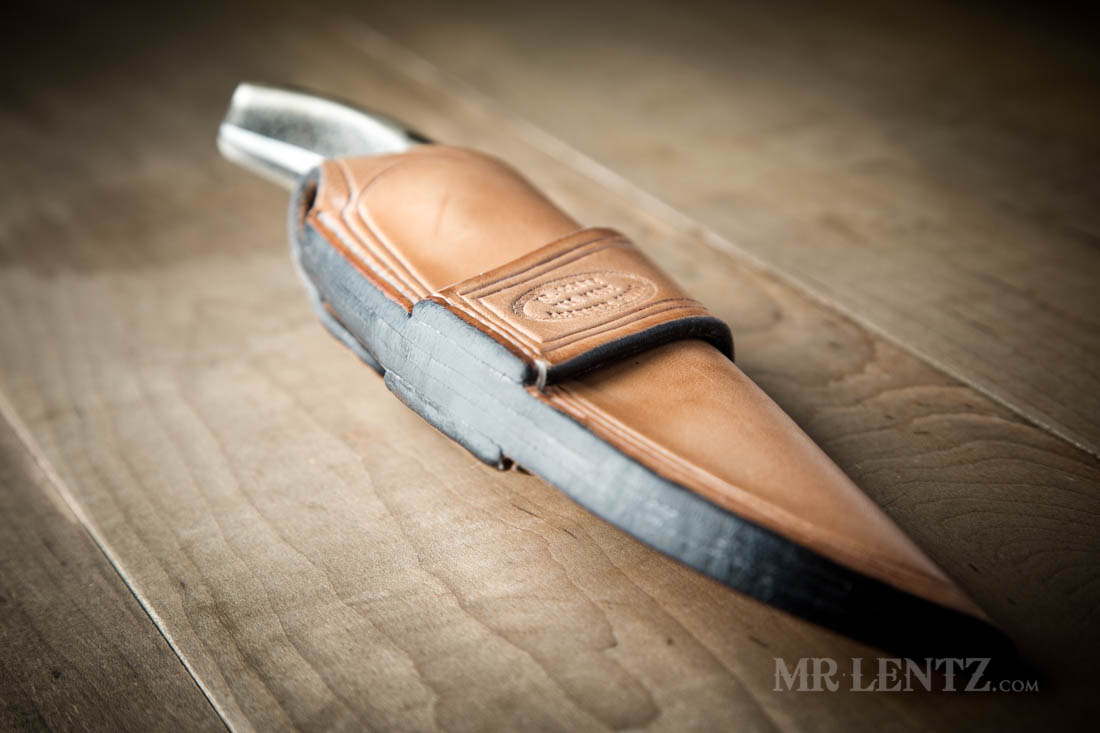 Edge slicking is a process and art in and of itself. First I cut the edges close to flush, then continued sanding them down perfectly using higher and higher grit sandpaper. At that point I dyed the edge with some natural shop-made vinegroon which i just steel wool left to sit in white vinegar. The sheath was then slicked while damp with both a canvas cloth and a cocobolo slicker. A final shine is given by rubbing in a coat of wax and buffing smooth using a soft cloth. 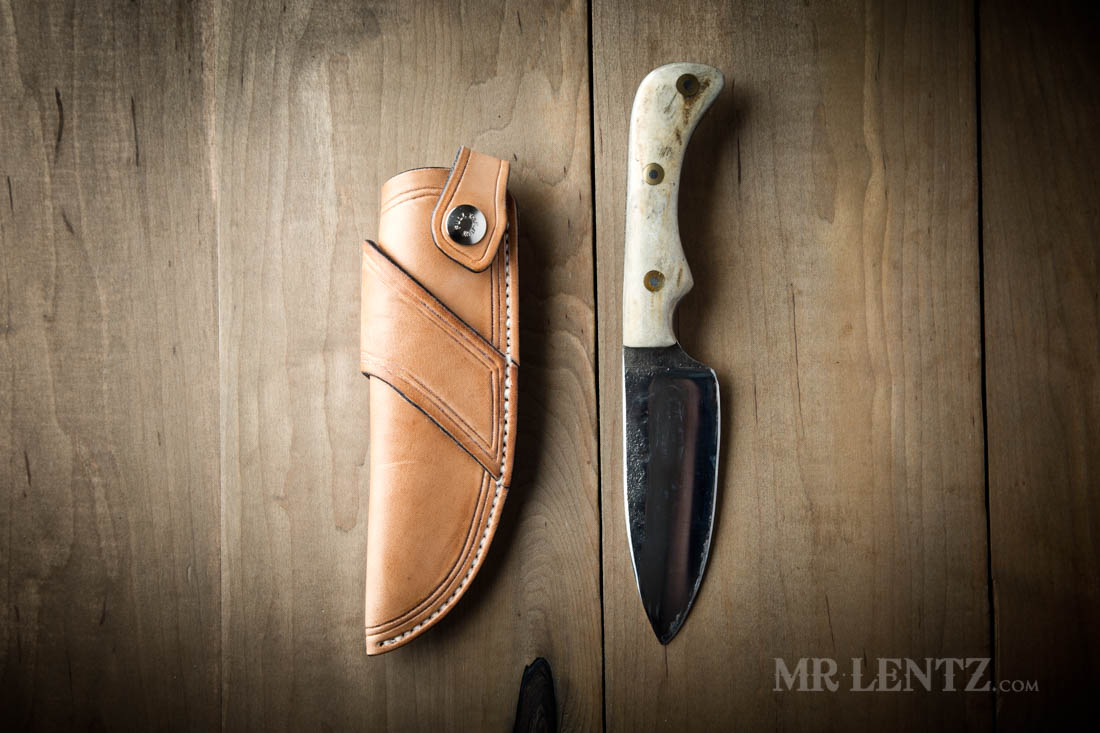 I have been developing the art of hot-wax dipping for all of my sheaths. It’s an old timer method for oiling and waxing leather goods to protect the leather – before any of the environmentally unfriendly chemicals were developed in the mid 1900’s. Hot wax dipping is a method that the ancient Romans were using and likely hundreds if not thousands of years before them too. I consider it a superior method for protecting leather since it penetrates the fibers very deeply and makes the sheath practically water proof. If the sheath ever needs a new coat years down the line, you can easily make your own and re-apply or send it on back to the shop. 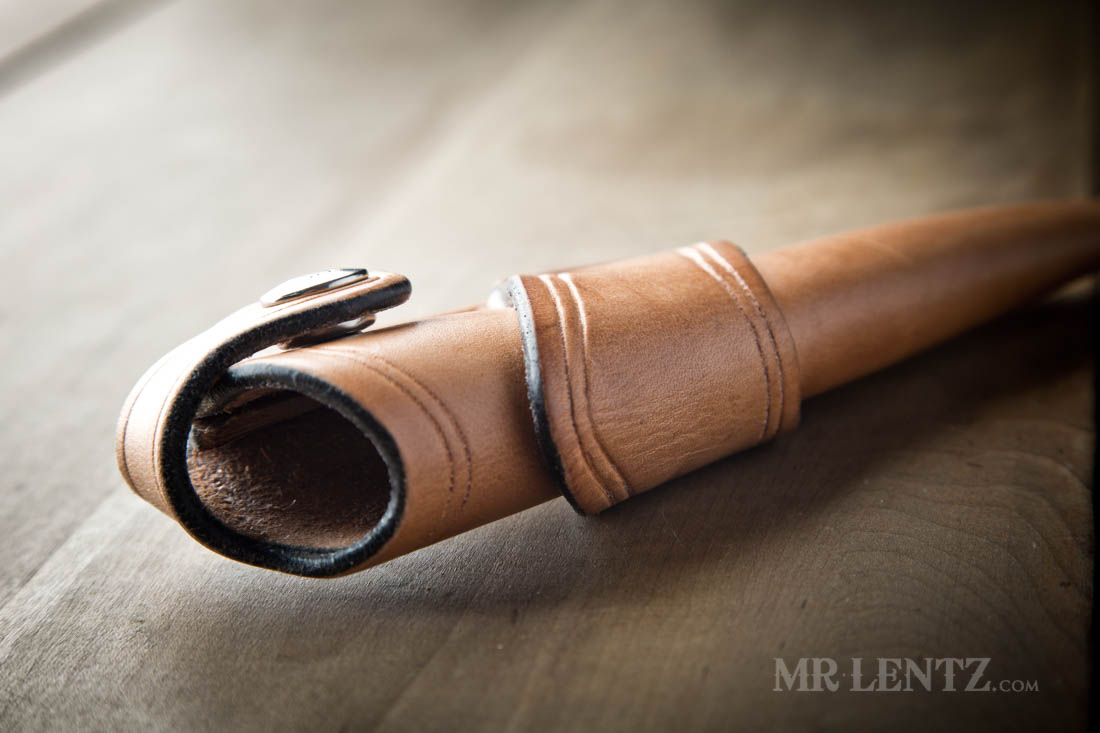 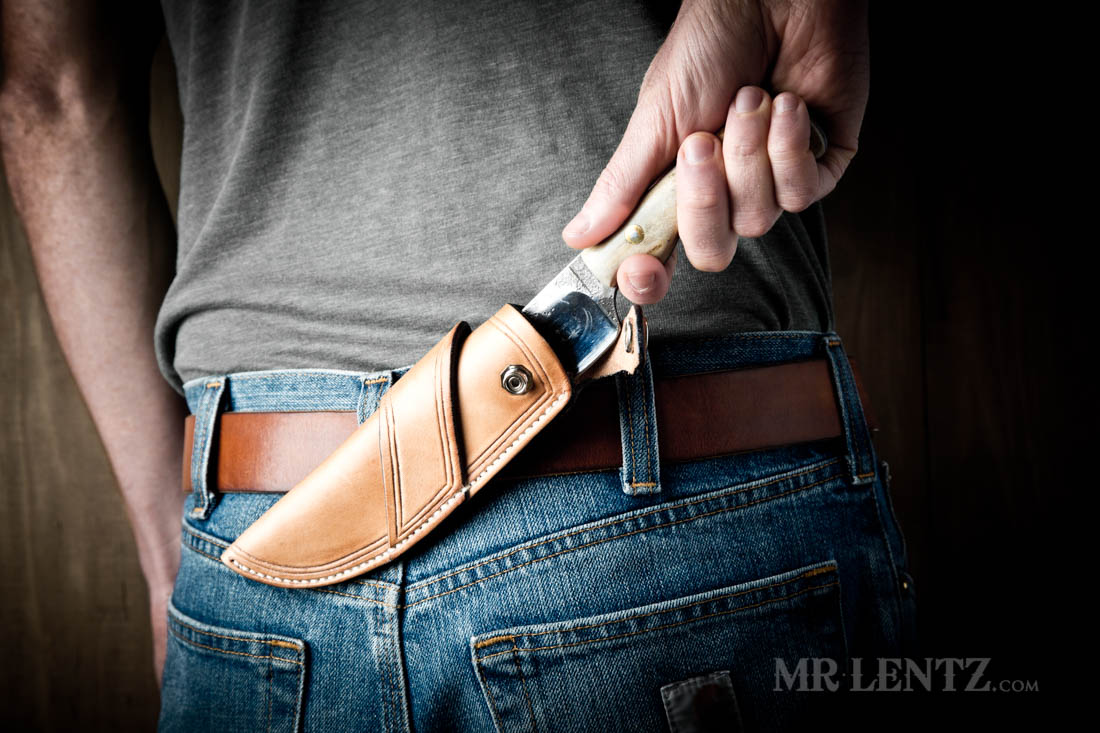 Overall I am happy with the simple look and functionality of this sheath.