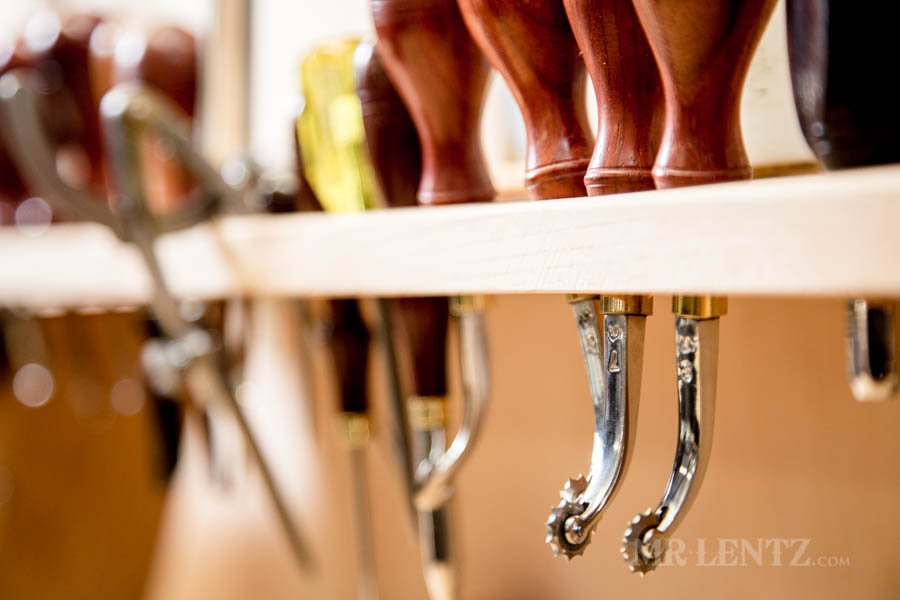 With the maple butcher block top delivered, I decided to finish building my leather tooling table. This isn’t a true butcher block of course, it’s the modern cheaper kind that most are familiar with. True butcher blocks are glued together with the end grain facing up. That old style of table top was actually commonly used in leather shops in the past. If I could find an affordable one I would have used it instead – you can cut right on top of those tops with ease. You can find Part 1 of this build here.

I was a little wary of cutting my brand new maple top. I wanted to make sure I got the measurements correct because there would be no going back. I must have measured and remeasured many times then double checked those measurements too! The bottom line is this – it should fit right around the granite block and the block should reach out barely past the edge. To allow for a bit of error I measured things just over 1/8″ wider than for a perfect flush fit. That gave me room to play if something was slightly off, plus I know it to be easier to make the first cut than to go back and make a second adjustment cut. I drilled two holes at each of the corners where the granite would go to help prevent overcutting.

At first I tried a jigsaw (not shown), and realized a few inches in that the blade would cut through the 1 3/4″ top…but on the up-stroke it went above the bottom plane and caused the saw to veer off course and cut an angle, whoops! So plan B, which should have been plan A was to use the track saw on a track and gently ease into the cut, getting as close as possible to the drilled holes. And no – I am not sponsored by any of the tools shown on these posts! Any brand will do.

The track saw made easy work of cleaning up my first unfortunate cut with the other saw.

Cutting the back section was the hardest since it was a plunge cut and I was apparently too lazy to set up the stop to keep the saw from jolting backwards during the plunge. I went slow and things went fine. To cut the final inch or so on each edge I used a fine tooth hand saw. Let me tell you something – invest in a nice long, fine toothed hand saw – you will thank me later. Many years ago I only used the cheapo ones from the big box store and had a hell of a time making clean cuts. Life is easy now!

As a final touch I sanded up the edges to clean it up. I attached the top to the apron using small L-brackets placed in the center of the table. This allows for the normal expansion and contraction of the wood along the table apron. Everything fit quite nicely as you can see with one exception. I tested out a little stamping on the granite and realized the bounce issue needed more work. In the image above you can see the third leg I added with an additional crossmember. That was a quick fix. I also used a little help from some store-bought 1/32″ plastice wedges placed under the legs to balance everything. It is now officially a leather tooling table / tank.

To help keep the tools organized and add more space I drille holes in a plank and attached to the wall with L-brackets. This actually turned out to be a very bad idea – you will read why in another post next week. The why includes 4 stitches!

Magnetic tool racks are really handy to store some of the smaller items like needles. Although I am wondering if the single diamond awls might get their edges damaged from taking them on and off. I typically wont switch them out often, so it’s probably ok.

Here’s my old stamp holder I made in a hurry a few years back. They work better with an angle built in. The one behind it was purchased recently and while it takes up a bit of space, it’s much easier to see the stamps.

Here’s a closer view of how the granite block fit. It came out within the tolerances I planned for, so no complaints there!

I am not the biggest fan of how many legs there are currently on this table. I thought about removing some and re-positioning…but at this point it works and I’d rather be working with leather.

About an 1/8 to 1/4″ above the table surface. This was worth every second to plan and execute. It is much easier to work on a table like this.

If you have any questions about the build or are looking to build your own, please add a comment below -I usually answer within a day or less. Thanks for reading!